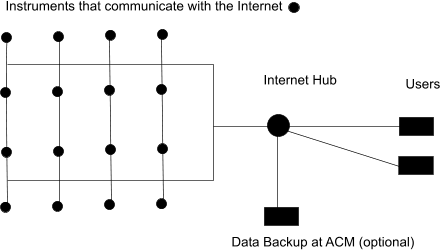 Internet Control enables ACM Instruments to be controlled and data retrieved via the internet. ACM Instruments provide a dedicated server for this task and also provide additional support by backing up of data transferred through the Internet Hub on a PC located at ACM Instruments.

Each instrument is a separate stand alone instrument in its own right, such as a Gill AC, Gill 8, Field Machine or derivative of these instruments. All instruments are controlled via their own PC. Data is occasionally passed to a web site typically hosted by ourselves for this purpose, where it awaits download to users who have the correct access code. Data from the Internet Hub is occasionally store at the Data Backup PC at ACM Instruments for additional security. When changing the measurement parameters of the instruments, the process runs in reverse, such that the users place new measurements instructions on the internet site and the instruments download these parameters on an occasional basis.

Communication with the instruments may be via a land line, mobile phone or satellite link. A recent use of this technology was for one of the worlds most prestigious car manufacturers who offer a 30 year bodywork warranty. They were testing the corrosion resistance of their cars in all sorts of hostile environments around the world. Data was transmitted from the boot of the car during the testing process. On some occasions data transmission would be interrupted, however this does not pose a problem in that the system simply tries to transmit the data the next time round using a checking system.

Internet Control can be fitted via the PC in a simple manner which is fine for most tasks.  However for instruments in remote locations, then we recommend an additional measure, such that if an instrument locks up for any reason, Watch Dog circuitry will automatically restart the instrument and PC so that data measurement can continue. The PC may need to be specially set up to enable measurement to continue after a restart. Such a PC need not look like a standard PC and may be incorporated within the instrument with external connections for PC peripherals. To the casual observer, an instrument fitted in this way may just look like a box with a power source of some kind.