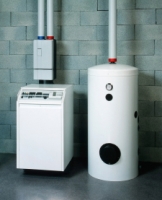 Central Heating systems are typically a complete mixture of different metal types, including copper, aluminium, mild steel, brass and cast iron. In some systems, many of these components are isolated. Typically however, all the elements are coupled together, such that the couple potential and true corrosion potential, is actually some combined potential of all the elements making up the heating system.

A inhibitor that is made up of a mixture of fluids that has been developed to protect each of the elements in isolation, has a good chance of failure and even corrosion enhancement when mixed together in one, "hope for the best" brew.

Customers who develop corrosion inhibitors for central heating systems are best served with an instrument such as the single channel Gill AC or the multiple channel Gill 12 fitted with the AC and DC Weld Test Option. This enables them to monitor the galvanic currents flowing between the multiple electrode couple and also perform polarisation tests to indicate the overall corrosion related activity on each of the electrodes in the couple. Having this information, it suddenly becomes obvious where the inhibitor is failing. The appearance of the galvanic currents help to indicate if pitting is taking place.

A variant of the Weld Test option is the AC & DC Offsetting Weld Test Option. This enables the user to also take simultaneous readings from all electrodes in the couple whilst they are offset to their individual uncoupled rest potentials. An important consideration, as in some areas of the central heating system, for instance in the middle of a mild steel radiator connected by plastic pipes, the steel is likely to corrode as if it isolated but still in contact with ions emitted by the other corroding elements.

A typical central heating system will have periods where it is cool followed by a rapid rise in temperature. ACM has and can supply systems that control the rate of heating, cooling and flow rate. If an electrical heater is used, the heater can be placed within a cast iron or aluminium jacket, which is in itself one of the test electrodes. In this way the test will simulate heat input into the system in the same way as a gas or oil powered boiler.

See Application Notes for more information on inhibitors and welds.